My name is Shelby Lemmon and, like all these other lovely people, I’m also a peer mentor for the Hixson program! I’m a 2011 Hixson Scholar from Carroll County majoring in Event Management. The Hixson program is one part of Iowa State that I’ve become greatly involved in, but another huge part of my involvement here is with the Greek community! 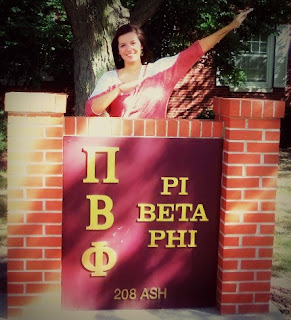 I just joined the Greek community last year, as a sophomore, and although I’m still a bit new to the whole thing, going Greek has hands down been one of the best decisions I’ve made at ISU!

Let me just start off by saying that I do realize that there is a stereotype about Greek life – the media likes to portray sororities and fraternities as these groups of college kids that just want to party and have fun. Unfortunately, a lot of people believe this is how it really is, which is why many college students never even consider going Greek! To be honest, I’ll admit that this is the image I had of Greek life when I first came to Iowa State, which is why joining a sorority never even crossed my mind.

It wasn’t until a few weeks after I moved into the dorms that I really began to reconsider this image I’d built up in my mind about sororities and fraternities. I lived on an all girl floor in the dorms my freshman year, and a lot of the girls I met and became friends with were in sororities! They weren’t at all like the sorority girls you see on TV and in movies – they were all down to earth, honest, caring girls who really just wanted to become involved and meet new people.

Let me break it down for you:
·      Day One: You’ll meet with your formal recruitment group, which is a group of girls living in your general residence hall area or floor who you will be with for the remainder of the week.
·      Day Two: You will go to all fifteen chapters, talk to girls, and learn a little about each one of them.
·      Day Three: You visit nine of the chapters (narrowed down by both you and the chapters themselves) and will see them each perform some funny, entertaining skits!
·      Day Four: You’ll go to six chapters and will be given house tours of each.
·      Day Five: As the final day of visiting the chapters, you’ll go to just three. You will have one last chance to ask any questions and really get an idea of if you could picture yourself in one of these sororities. If, after this last day, you decide you want to join a sorority, you will have the option to preference it and, if the chapter preferences you back, you’re in!
·      Day Six: The big reveal of what sorority you’re in, and you will also get to meet your new sisters!

Because so many girls are doing recruitment and each chapter can only house so many girls, those who go through recruitment do not always get their first choice. But as clichéd as this sounds, everyone ends up where they are meant to be! I know quite a few girls who did not select the sorority they are in as their first choice, but they love where they ended up and wouldn’t trade it for anything.

With all that said, I realize Greek life may not be for everyone, but how are you going to know whether or not it’s for you until you give it a chance? I’m still friends with a lot of the girls that were in my formal recruitment group and have found friends for life in many of my sorority sisters. Greek life provides students with many campus leadership opportunities and also with a way to give back, as each sorority or fraternity has their own philanthropy they fundraise for through various activities throughout the school year.

I’m sorry this post got so long, and I’ll wrap it up; this is just something that I’m very passionate about! I truly believe there is a chapter for everyone, and I’d encourage anyone who has any questions at all to send me an email! I promise my response won’t be as wordy as this blog post. :)

So if you have any questions – about Greek life, recruitment, fraternities, or Iowa State in general – please don’t hesitate to email me at stlemmon@iastate.edu! I really can’t wait to meet all of you in the fall. You’re going to LOVE Iowa State!

Posted by Hixson Peer Mentors at 10:09 AM

You'll be moving to Ames/ Iowa State before you know it... What are you looking forward to?

Connect with the Hixson Program